Debut is a visually surprising way to produce small objects at your fingertips!

Utilize this clever gimmick in your pre-existing routines or a use it in a straight forward impromptu situation for friends and family.

A great magician takes advantage of every possible situation and Debut allows you to turn ordinary moments into something captivating and impressive!

Dry lips? Magically make a chapstick visually appear at your fingertips! Need a sharpie? Boom! Make a sharpie appear! It looks like real magic and can be done with an unlimited number of small objects.

Debut was designed by the Abstract Effects team, taking the classic small object appearance to the next level, sleight of hand can only look so magical but with Debut, those simple magic moments get a serious upgrade.

Show your hands cleanly without any palming and make any small object visually appear with Debut!

From their promo trailer, it’s clear that Debut by Abstract Effects is targeting 14 and not 40 year olds… While you do need to mind your angles, this trick is fun, easy to do, and perfect for the total beginner. There’s nothing to construct so no worries about having to do any time-consuming DIY; you receive the gimmicked chapstick and a 3D printed unit that allows you to produce an array of various small items as featured in the video.

You get a 40 minute tutorial touching on various concepts for Debut. It’s a simple one camera edit with clear audio, good enough to give you some ideas to start with. In particular, I like some of the suggestions shared by Nicholas Lawrence. Using Sharpies, he came up with a presentation where you appear a marker using the Debut gimmick before transposing it to your other hand. There’s also one with a mini Rubik’s Cube, cigarette lighter, card box… basically stuff that I can see young magicians performing on social media.

The creators use that word a number of times in their video explanation. Debut is something quick and dirty for Instagram or TikTok. It’s not meant to be a full routine with a traditional narrative, although a couple of concepts were thrown around involving equivoque aka magician’s choice. You don’t need to use all the ideas. Just take whatever concept works for you and run with it.

Other topics touched on in the online tutorial besides the performance and execution are: how to get into it, refill/ prop maintenance, and gimmick adjustment. Since altering the size is a process which involves heat, an emphasis was made on getting parental help if needed. Again, this tells me their target audience is the youth segment.

Debut is kinda like Thumbtip x Flipstick for 2020 and I’m going to call a spade a spade: Debut is the quick instant coffee to the fancy gourmet stuff (to put the latter in context, think of sleight of hand demi-god Paul Gertner) and it doesn’t pretend to be otherwise. Granted, it’s not for everyone; there will be sleight of hand purists out there who are correct in their stance that one can accomplish this with skills instead of slapping down 25 bucks for props. But to each their own.

Visually, the trick looks very good and I’ll be honest… I’ve been having a wee bit of fun with this the moment I took it out of the box. It looks great even practising the “move” in front of the mirror and selfie cam. And the spouse, who is usually critical and cynical about anything magic, was actually got caught off guard and asked for an encore of Debut.

TLDR; Debut by Abstract Effects makes a nice quickie for social media, and I believe that’s one of its key purposes. You can perform it right away using the chapstick but if you’re creative with the included gimmick, plenty of possibilities abound. So if you’re a noob to magic who wants to look like you’ve got legit skills, this is worth the check out.

Magic is our passion but we are not a magic shop  You can purchase this here![/vc_column_text][/vc_column] 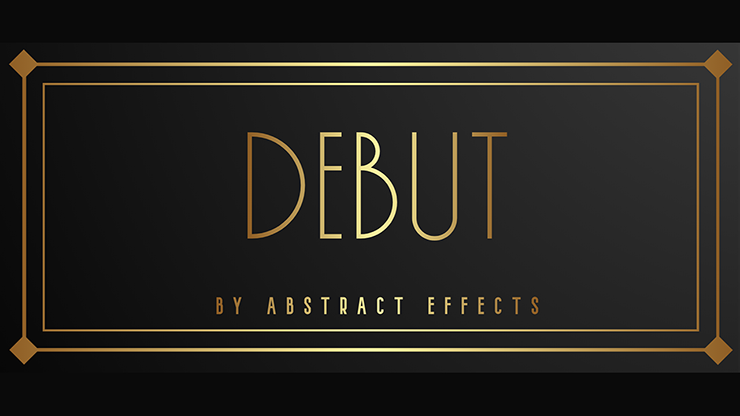