In the world of magic, there’s a category that I like to call “by the way/ in your face” magic… visual stuff that happens when people least expect it. For instance, sunglasses that appear on your face before you magically change the colour of the frames. You know what I mean. Performance material like that are great especially when you’re putting together a showreel (hello Netflix!) and fab even on popular social media platforms like TikTok or Instagram. It’s quick, it’s dirty, there’s no long drawn out patter, just BOOM in your face visual magic. So if you’re looking for such ideas right now, you’re in for a treat 😉

The mind of Roddy McGhie and Jamie Williams is where quirky effects become visual miracles that get gasps from your audience. Quick visual magic is one of the best ways to sprinkle extra effects throughout your routines, and if you want to give your signed card effects some extra kapow, look no further than Roddy McGhie and Jamie Williams Kung Fu Kap.

Kung Fu Kap is the perfect addition to any signed card routine. Once you’ve had the card signed you take your marker back and offer to show them a quick stunt. You claim you can toss the cap in the air and then in one swift motion re-cap the marker just by stabbing the cap out of the air. You toss the cap in the air, but instead of it landing perfectly re-capped you stab the marker through the cap! The marker visually goes through the cap, which can then be handed out for examination.

Kung Fu Kap comes with the specially gimmicked cap, and a matching marker. You’ll learn in detail from Roddy how to make this minor miracle play huge. This is the perfect addition to your ambitious card routine, or any time you need an audience member to sign anything. Easy to do, and it resets in a snap. This is Roddy McGhie’s and Jamie Williams Kung Fu Kap.

I absolutely love watching the packing videos that Penguin Magic always sends you after they’ve popped all your orders into the box for shipping. So it with with gleeful abated breath that I waited for this bit of kit to finally make it’s way over to me.

The packaging for Roddy McGhie and Jamie Williams’s Kung Fu Kap is quite simple; a fitting ziplock bag with the inserts and then the provided gimmicks. As mentioned in their official ad, it’s a download video so you can easily access the tutorial in your account.

Checking out the Kung Fu Kap gimmicks, I have to say that I’m really quite pleased. The creators could have gone cheap and just provided just the one gimmick but they decided to include a brand new working Sharpie marker in the package as well. This is especially handy for those who reside in a country that don’t have Sharpies available, or find it difficult to purchase one for some reason.

Coming back to the gimmick, I have to say that it is nicely made. In his video, Roddy shared that he did them himself and that is commendable because such gimmicks could have been cheaply produced and made badly. So well done on that front!

An old school coin trick in magic that’s much favoured by grandfathers and uncles would be the good ‘ol Karate Coin. To be completely honest I see it as more of a gag, because you wouldn’t make a big show of getting people’s attention (unless you rock a cheesy performing persona that’s actually funny and not cringey) before punching your finger through said coin. Roddy McGhie and Jamie Williams’s Kung Fu Kap is similar-ish in mechanics to that coin trick BUT because it’s a Sharpie, it lends motivation for your spectators to use the marker for signing a card or coin for an effect you’re about to do… before you surprise them with this nifty “by the way/ in your face” magic trick where you pretty much Kung Fu the tip of the marker through its hard plastic cap.

You can definitely show that the iconic black plastic Sharpie cap has been pierced through, and even hand out the odd art display for close up examination because this will be something people (especially girls) would want to see. Obviously no one will actually believe you have Kung Fu prowess but with the right patter and charm it will get you laughs and giggles.

And on that note, sound advice on audience psychology and spectator management are provided by both creators in their videos (filmed during the Covid-19 lockdown in the UK), as well as, crucial handling tips and variations of the moves. Yes… you’ll need a fair amount of dexterity and timing to pull this off so be prepared to practise in front of the mirror before performing this outside. If you’re already a coin worker, then this will most likely come much easier to you and you’d be ready to bust this one out in no time!

Nothing says “Hey I’m a magician, would you like to see something” more than this visual icebreaker that will grab people’s attention. While not designed to be a dramatic closer, Roddy McGhie and Jamie Williams’s Kung Fu Kap is a fun trick that barely takes up any pocket space. Reset is instant. Custom made gimmick should last you a lifetime with care. If you’re a close up worker, I heartily recommend this cutie 🙂 Works well too on social media platforms like TikTok. Grab yours now exclusively from at Penguin Magic. 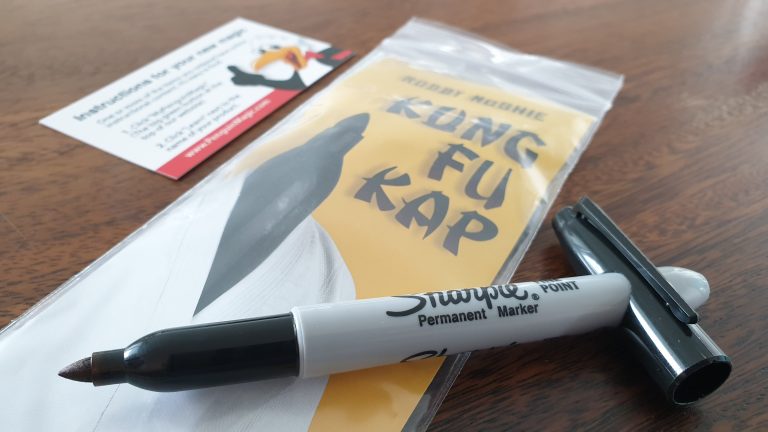