Since my recent review here on NingThing about one of my favourite mentalism wallets, I’ve been requested by readers to share another cheaper alternative that’s close to or equally as effective. One such magic wallet which comes close sprang to mind; it does nearly almost everything the Blind Man’s Wallet by Menny Lindenfeld is capable of (peek wallet + CTG) while costing just half the price and a lot less pocket space minus the bulk.

Read on to find out more about the very clever Razor Wallet by Dee Christopher.

Razor gives you a FULL PEEK of any business card, billet or index card that is placed inside it. And the best part? You can do it in FULL VIEW of your audience. They can literally watch you peeking and they won’t have a clue. All of this means that you can secretly learn ANY phone-number, name, word, pin number, shape, doodle or number someone can think of. Whether you’re a magician who likes to throw some mental magic into your set or a mentalist who is looking for a powerful way to access your participants thoughts, THIS is for you.

Crafted from the ground up by master artisans to Dee’s exact specifications, this is the kind of wallet that looks right at home in the front pocket of any modern mystery artist. Dee designed this wallet to be fashionable and unisex. It is made from cruelty free materials so that everyone can add Razor to their EDC, regardless of their gender and lifestyle. Not only will you get a powerful peek with this device, also included is a unique handling for a visual card to wallet where the audience actually sees the very moment their card appears inside the ID window. Very limited stock is available after a complete sell out at the Blackpool Magic Convention; don’t miss out – Add Razor to your EDC today!

I’ve been a fan of Dee Christopher’s work for well over a decade now and am glad to see the goth mystery performer now teaming up with Penguin Magic to produce gems like the Razor Wallet. This unisex wallet looks so innocent but in the right hands, it will melt brains! The wallet comes in two colours (both very classy so you are spoilt for choice) and after much consideration, I chose the crimson version since I usually wear black when I perform so it’s nice to have the prop stand out.

Crafted from cruelty-free vegan leather, it’s slim and modern looking, and fabricated from the ground up according to Dee’s specs. I love the feel of the Razor Wallet right out of its box (everything you need to get started is included in the box). While the red version is marketed as “crimson”, it looks a lot more like a rich shade of burgundy which works better for me 🙂

If you’ve purchased this P3 exclusive direct from Penguin Magic, you’ll receive a bunch of videos: five in total presented by the creator himself (Dee’s own demo and tutorial using it as a peek device and CTW), his friend Josh (clever close up handling without using the included screen, as well as, his stage handling incorporating a magic square), and Eric from Penguin Magic (a cheeky ID switch routine which sees an unsuspecting spectator’s driving license magically transpose with yours). There’s also a 9 minute performance of how Dee uses his Razor Wallet and I recommend you take time to study how Dee, who is a real worker and not just a magic creator, makes it all about his two spectators and not the prop.

Here’s a quick glimpse of the Razor Wallet in action…

As you can clearly see from my GIF, the Razor Wallet is such a brilliant piece of kit. The concept isn’t entirely new as I owned a notepad with similar qualities from over a decade and a half ago, but this is really so much better because you’ll never need to worry about refills and it is so versatile!

The built is razor thin (hence it’s name) and light, taking up hardly any space in your back pocket. There are no secret flaps to flip so you can sneak a peek of what’s written or drawn right under their noses, and I’m happy with the quality of the materials …and even happier with the price which is cheap in context for a custom made magic prop. It’s not difficult to slip your credit cards and business cards into the pockets (they slide in and out like butter), and to your audience the Razor Wallet looks just like any regular card holder.

Now on that note, it’s good to remember that less is more. So don’t try to shove too many cards into your thin Razor Wallet because at the end of the day, it’s only a magic prop. It’s not meant to actually store a thick stack of cards so just keep three to four in there to use every time you perform, then reset before bringing it out again to perform for a different group. I always keep a box of spare business cards (unlaminated with one side blank) in another pocket and top up accordingly as I go. Trust me, doing this— more so if you’re engaged for tablehopping gigs or strolling magic for groups— will help preserve your wallet for years to come.

As mentioned earlier, five video tutorials are included and all in all, their quality is just as stellar as the product itself. I found the instructions top notch. You’d be mighty inspired with the plethora of possibilities that can be done with this lethal weapon. Besides reading minds, you’ll have the power to make things appear and disappear, and so much more!

The Razor Wallet by Dee Christopher truly is a clever, well made peek wallet that you’d always want to have with you even on days you’re not working a gig. In fact, I wouldn’t be surprised you’d get gigs because of it since this handy mentalism tool serves as a brilliant way for you to showcase who you are when you hand out your business card… much more than say, trying to give out a stinky/ charred/ half-melted/ sooty business card that caught fire in a place with overhead sprinklers.

In my experience, people always go nuts whenever I use it. There’s nothing suspicious at all when you bring it out since the audience sees both sides of the wallet (don’t draw attention to this, just flash both sides causally while talking) and one time right after a show, someone came up to me and asked for lottery numbers because they were utterly convinced I was a real psychic. So remember, with great power comes great responsibility 😉

With no sneaky moves, you can easily get a swift peek right under their noses in full view! A perfect audience fooler which can be performed as a powerful stand alone effect or incorporated into other routines, you can also use Dee Christopher’s Razor Wallet to house your favourite packet trick (I personally keep Max Maven’s B’Wave Deluxe in mine)! Easy to handle with no flaps to access for the magic to happen (some audience management required due to angles but it’s not rocket science), this quality prop can be used with confidence in most lighting conditions (not a problem if you work in a restaurant/ pub with ambience lighting) with a regular Sharpie, and with so many variations and different ways to incorporate it into your set, I’m confident you’d be having this minimalist wallet in your back pocket every time 🙂

A modern masterpiece that’s obviously crafted by a true worker who uses it himself, the Razor Wallet by Dee Christopher comes very highly recommended. 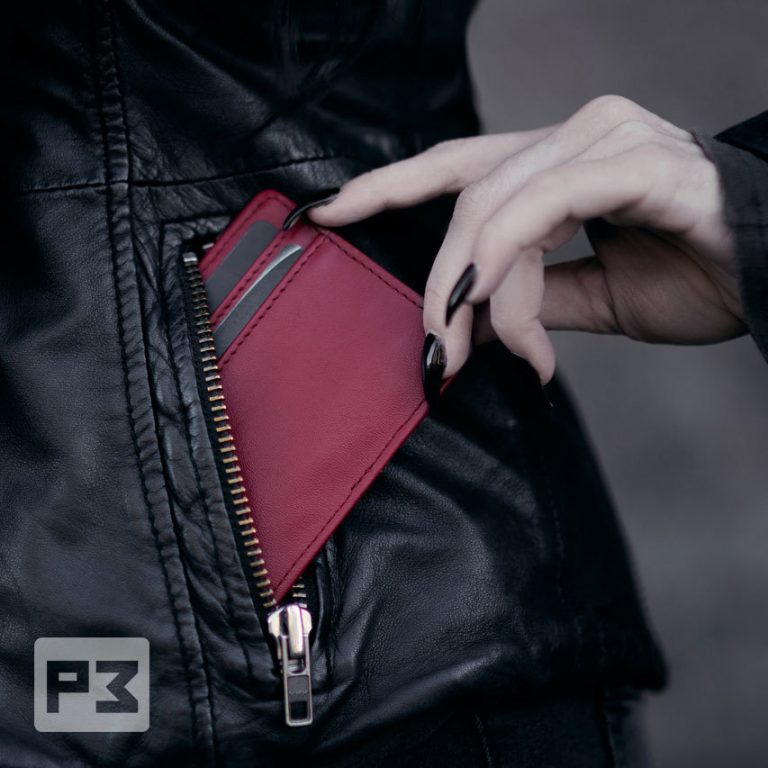