If you’re a magician looking to add some fun pizzazz from the usual cards and coin tricks in your repertoire that would really shake up your audience… but don’t want to bother with having to wear a jacket or deal with troublesome reels and props that take up too much pocket space, read on… you’d be pleased with this very nifty offering from Puerto Rico magician, Reynold Alexander.

Ring in the Bell by Reynold Alexander A shocking finale you can add immediately to your show. A borrowed ring appears in a bell they’ve been holding and using!

“I have been waiting for Penguin to release this trick for a LONG time…I will 100% use this!” – Cody S. Fisher

Ring in the Bell is a practical, commercial, memorable, deceptive, dependable, and magical routine. What else can a magician want? – Karl Hein

Ring Flight is a classic in magic that combines a borrowed object to an impossible location with the emotional hook of the object itself. Ring In The Bell is an astonishing ring flight with a sure-fire method that allows you to vanish a spectator’s ring and make it re-appear on the clapper of the bell they are holding.

Reynold Alexander has been refining this method for years, and now he is sharing his brilliant method with the world. Not only is it easy to do, but the method is also practical and doesn’t involve reels or pulls. The ring is under your control the entire time.

A bell is an inherently magical object that produces a mysterious sound. When your spectator’s ring is revealed to be the clapper on the bell your audience will flip out. Ring In The Bell is perfect for walk around, parlor, and even stage performers. Put Ring In The Bell in your act and create a magical experience with your audience’s most personal possessions.

Unboxing Ring in the Bell by Reynold Alexander

When the parcel from Penguin Magic arrived at my doorstep, I was thrilled to tear through the contents and immediately reach for Reynold Alexander’s Ring in the Bell. It was launched late last year and was even nominated for magic awards; now that Covid-19 lockdowns and restrictions have been lifted, this is an excellent time to perform an engaging routine like this.

The luxurious box it comes in has a strong magnetic flap, with custom made foam inserts to hold the prop snugly as it wings its way over to wherever you are in the world. You receive a shiny silver bell with a smooth black wooden handle (solidly built unit but still light in weight), along with a gimmick that allows you to make the magic happen. You can easily find replacements in various sizes if you ever lose it, so no worries there. And obviously, you’ll need to use your own ring when practising and a spectator’s when it comes to the performance.

This is an exclusive Penguin Magic product, so the video tutorial should be already there in your account. It’s nearly an hour long, with street performance bits by the creator of this trick, and moves taught in studio by the charming Nick Locapo from Penguin Magic. Shot with multiple camera angles and clear audio, it’s of that gold standard of high production quality that we’ve all come to associate Penguin Magic with. Audience psychology, timing, misdirection, and the moves are all adequately covered in Nick’s well-taught tutorial.

There’s so many things that I love about Reynold Alexander’s Ring in the Bell. Firstly, the producers certainly picked the perfect name. Secondly, it rings really well! It produces a really pleasant sound, which is an important point because you wouldn’t want to annoy your audience 😉

Next, the gimmick is simple but well made. The bell is wide and the construction is good; everything is well assembled together and should last you a long time. Although different in looks to the actual prop used by the creator in the official trailer, it works exactly the same. But having said that, I’m sure there would be others who like me, wish that perhaps there could be a “deluxe” version with the same elegant wood handle and brass bell that was featured in the video.

This is a beautiful take on the “ring flight” as there’s no need to fumble with reels, you don’t need to specially wear a jacket to get things done, and IMHO it just makes sense. Just tuck the bell into your back pocket and you’re set.

Now while it is marketed as being able to accommodate any ring, take that message with a little pinch of salt. Obviously with any similarly themed effect, pick the right audience and the right ring for your performance. I’m sure you’ve heard of magicians who have complained about getting into trouble with a volunteer during their ring flight routine because a pricey diamond from her engagement ring fell off, or her expensive jewellery got scratched, or the woman claimed that it wasn’t her ring but a cheap knockoff instead.

So make good decisions, don’t be that guy. I’d say “walk the middle path” and use audience management and your gut to suss out the right volunteer with the best ring (e.g. a plain wedding ring of a good size). The workings of it are easy to do, and with a bit of practise I’m confident anyone would be able to perform this in no time.

A brilliant thing about using a bell is that it can immediately attract more people to you. This works if you’re busking outdoors or doing table hopping inside a restaurant or at an event… the sound (yes, you can ring it anytime even when there’s no ring attached) alerts people and they will know that there’s an entertainer in the house. You can easily weave in the use of your bell during other sets like a card trick with your audience, having it already in play before using it as a finale for the effect with their ring.

There are just so many exciting possibilities!

TLDR: Ring in the Bell by Reynold Alexander

Simple to load, easy to perform, sounds good, solidly reliable, and doesn’t require anything extra to perform… this is a charming routine that will win people over. Expect lots of smiles and laughter. It plays big and will certainly add a nice touch to your show, so you’d be glad to have this in your arsenal. Highly recommended! Get yours exclusively from the good fellas at Penguin Magic. 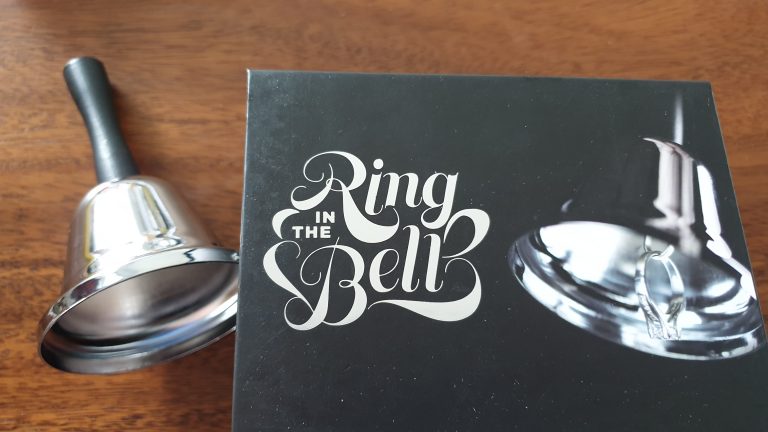