First published in 1968, much of what Corinda wrote in his well-loved book, The Thirteen Steps to Mentalism, still rings true today. And if we were to consider it as the “bible” to what we do and love as mentalists, much attention and study should be given to the book’s very first step – the Swami gimmick.

First published in 1968, much of what Corinda wrote in his well-loved book, The Thirteen Steps to Mentalism, still rings true today. And if we were to consider it as the “bible” to what we do and love as mentalists, much attention and study should be given to the book’s very first step – the Swami gimmick.

It’s the early days of 2021 as I write this review, and I had the lovely opportunity to test this clever gem over the holidays. I consider it rather underground since it isn’t distributed by Murphy’s Magic or sold at major magic retailers like Vanishing Inc, and this honestly would have honestly flown over the radar for me if not for my dear friend Michael Siegel, a New York based magician and long time member of the Magic Cafe, who always seems to know about the latest and greatest.

So without further ado… this, my dear friends, is the Script Clip.

As you can see in their official trailer above, this is essentially the 21st century Swami gimmick. Custom made using 3D printing, the Script Clip is the brainchild of American magician, Wesley Martinez. And it is with his blessings that I’m reviewing his excellent creation. Speaking to this young entrepreneur (Mr Martinez also runs a vape shop), I learnt that he acquired a resin based 3D printer to start prototyping ideas he had after being disappointed by what was available in the market. With plans of a design for a nail writer so small and nearly invisible that the user may hide it between their fingers and show both sides seemingly empty, he got to work and ultimately created his own version.

Now, I fully agree with the world renown mentalist Richard Osterlind that nail writers are better than the TT or boon style varieties; they take less effort in movement so that gives you more stealth. But having said that, the set of nail writers purchased from his website (mind you, this was quite some time ago) can’t be compared to these 3D printed Script Clips. They were cheap, flimsy metal that were for some absurd reason painted white instead of flesh coloured and needed much work before you could use them. So I am glad inspiration hit Wesley and he did something about it.

As you can see from my pictures, the nano size of these 3D printed Script Clips is what makes it stand out from the rest of the nail writers out in the marker. A special blend of resins was formulated for slightly elastic properties to reduce strain (this basically gives a lower chance of breakage) while providing phenomenal grip on your nail. Allegedly, it took no less than 200 revisions to achieve this!

You’ll need a bit of nail to use any nail writer efficiently. With the Script Clip, the fit is snug, so no worries of it falling off. And I like that various styles are available; beside the 4mm thick listo lead version that makes what you write looks like it was made by a Sharpie, there’s also the 1.3mm and 2mm pencil lead version in different styles. There’s the regular straight one which you pop right on your thumb nail, a brand new magnetic version of that for easier gimmick management in your pocket (my personal favourite), and a neat sideswipe edition that has the lead slanted at an angle. And since these are 3D printed and not difficult to customize, the Script Clips are available for lefties too!

Ordering is simple and hassle-free. You can get your Script Clip direct from Wesley, who inspects every nail writer before shipping it out. On that note, shipping is currently free worldwide. I’m in Europe and received mine fairly quickly despite it being the holiday season. Wesley also shared that he’s in the midst of making a special video for his customers (past and present) so it would be a good idea to join his ScriptClip Facebook group.

I do like these Script Clips a lot, and am pleased with the variety pack which allows you to get a good feel of the different styles and through a bit of play and testing, decide what works best for you. It would also be a good idea to order the lead refills. They come well packed in the same metallic tin, and should last quite a long time. All Script Clips come pre-installed with a lead but since everyone writes differently, it’s best to test out what length suits you best. I personally discovered that I have better control with a lead that’s not too long, but your mileage may vary.

IMHO these truly are the rolls royce of nail writers. However, if you still have concerns about the fit since it doesn’t come in various sizes like thumb tips, here’s a quick tip from the creator: pop on your Script Clip and let it cure under UV light (like those from your sister/ girlfriend/ wife/ mother’s UV nail device) for a good half minute to shape your Script Clip for a perfect fit. According to Wesley, this is a one time treatment but wouldn’t actually be necessary for most folks out there. Still, I thought this is good to know and well worth sharing.

All in all, I’m really glad to have found these gems. They’re absolutely brilliant, and I can’t wait to see more from their clever creator. The Script Clip by Meticulous Magic deserves a full ten stars IMHO and I do hope to see more from Wesley and his team… Perhaps future Script Clip varieties like ball pen ink, if you take a page from good ol Tony Corinda.

Easy to use, A star customer service, very well made. This comes highly recommended.

PS: A worthwhile companion I heartily recommend is a brilliant book called The Nail Writer Anthology by Thomas Baxter. The hardcover book is about 270 pages and covers the history and evolution of the swami, as well as, clever contributions of mentalists like Looch, Paul Brook, Hector Chadwick, Andrew Gerard, Patrik Kuffs, James Randi, Patrick Redford, Marc Salem, Barrie Richardson, Christopher Taylor, and many more. 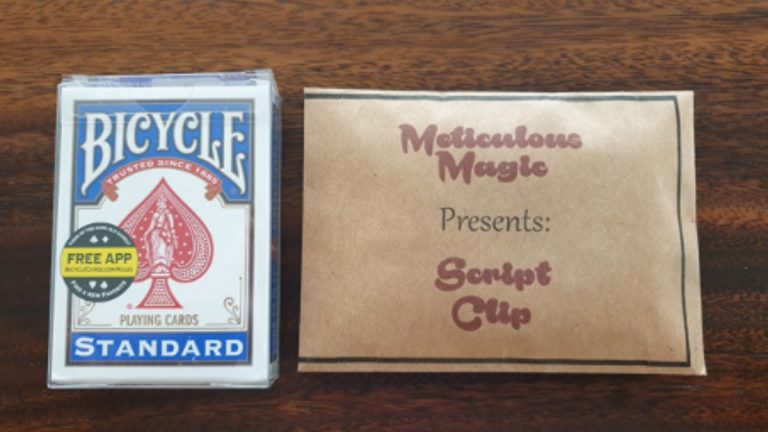