Review: The Raven by Chuck Leach

Review: The Raven by Chuck Leach

Last weekend I got to know a spirited young boy who’s just starting his journey in the world of magic. He did an excellent job performing his spongeball routine in the middle of his living room. After we applauded and he took a bow, his parents spilled the beans that I was a grand illusionist who also performed death defying escapes and ate fire sticks on TV. I didn’t want to steal his thunder so I started asking about the first magic trick he’d come across which inspired him to become a magician. When he shared that it was the magic ball and vase, I showed him Penn & Teller’s hilarious routine and we started to chat up a storm.

When asked for mine, I found myself telling him all about the early 2000s (the span of two entire lifetimes for the little man) and Chuck Leah’s well-loved pull device called The Raven, which was popularised by David Blaine, the amazing magician/ endurance artist who singlehandedly spawned the genre of Street Magic.

“Whoa, that’s a long time ago.” His keen bright eyes grew large. “Is it still one of your favourite tricks?”

“You bet!” I grinned and promised to get him one as an early birthday present.

Thanks to the the efficient Penguin Magic delivery service, I was able to gift the young magician a starter set within a week and was he absolutely thrilled with his Raven! Quite a bit has changed since I purchased mine two decades ago so I thought an updated review of this nifty magic device was in order. Read on to find out more!

Imagine the power of this awesome effect: You show a coin and place it on your spectator’s hand. With complete confidence you wave your hand (fingers open) over the coin… The coin vanishes right before the spectator’s eyes in one of the most visual moments in all of magic. The best part is, your hands can be shown completely clean! No sleights, no odd moves. This is truly one of the best investments in all of street magic. It works with many different objects, not just coins. And in addition to vanishes, you can make one object turn into another object, or shrink a coin into a miniature-sized coin. Many additional effects are possible with bills, matchbooks, and playing cards.

Why we Love it

This is The Original Raven by Chuck Leach.

Q: How long will it take me to learn to perform vanishes with the Raven?
A: It’ll take you about an hour of practice before you’re performing vanishes like a pro.

Q: Can I really perform it in short sleeves?
A: Yes, and your hands end up perfectly clean.

Q: Is any sleight-of-hand expertise required to perform the Raven?
A: No, the Raven does all the work. 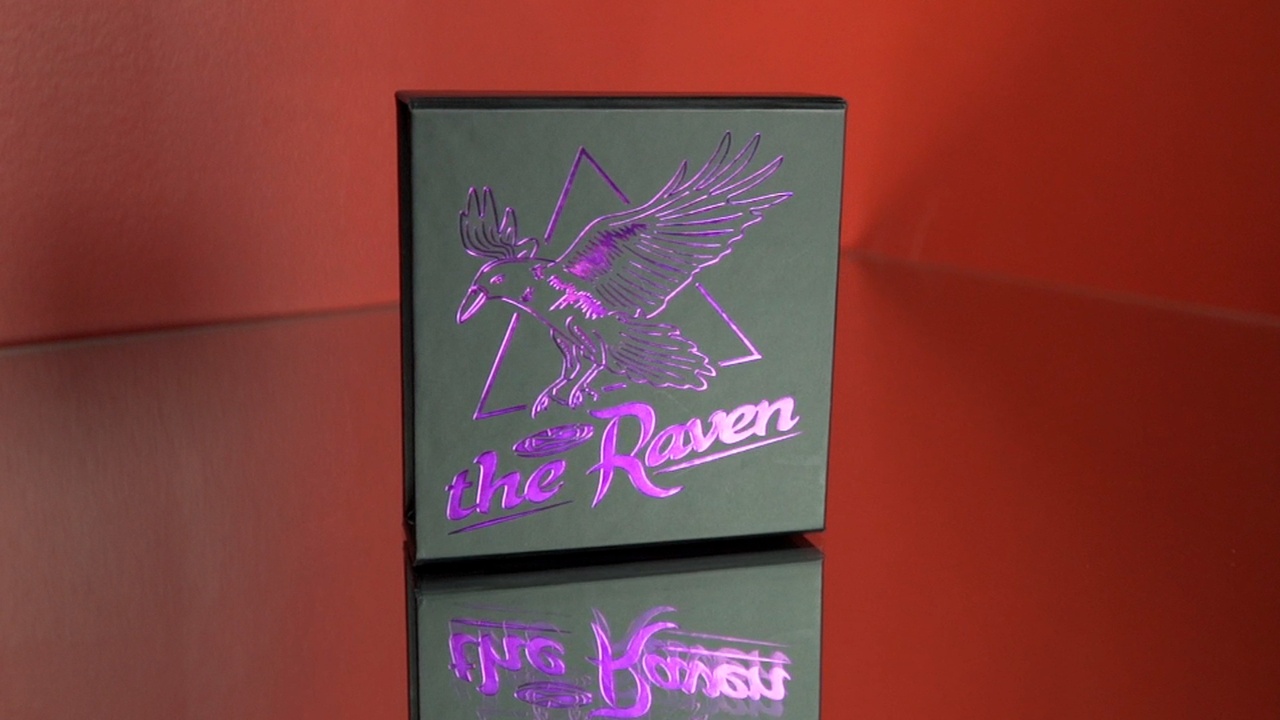 Unboxing The Raven by Chuck Leach

The Raven starter set from Penguin Magic arrived in a black box with a reworked design on the front displaying a handsome bird in striking purple. I don’t have my old box anymore but I remember the original artwork on it was gold, using an old timey font, and the illustrated raven looked more like a magpie or crow. This new box comes with a sturdy magnetic flap and foam inserts to keep everything in place, with its (very poetic) password and link to the online tutorial printed on the inside. My old one from the early 2000s came with typed instructions folded into a square and that was that!

You do receive a bunch of accessories to use with your Raven gimmick and there’s some customisation to be made to fit it perfectly to you. I think the included gimmicks differ slightly from the original set I owned because I recall there was a trick where you could shrink a coin but with this new one, Penguin Magic has not just one but TWO video tutorials presented by Nick and Josh, which I sure wished I had when I was first starting out.

The online instructions are extremely well done. The first video clocks over 100 minutes of solid content and sees Nick walk us through the various set ups (there are different ways you can attach The Raven to best suit you), prep and handling, before launching into a series of ideas that you can do using some of the included items in the package (e.g. the vanishing coin) , as well as, others that you can easily get (e.g. the appearing salt trick).

The second video is about 20 minutes long and Josh dives deeper into a couple of details regarding set up for various body types before sharing his own creative ideas which you can use The Raven for. I really like the presentation for his Rubik’s Cube concept and would encourage you to finish watching both videos to gather some inspiration before going out to perform.

What I’ve always loved about The Raven is that there are just so many possibilities with this sneaky utility prop: vanish, appear, restore, teleport, link, colour change, bend coins, use it as a holdout… the world is your oyster! The gimmick is clever, easy to set up and hide, not hard to use once you get the knack of it (yes there are angles to mind, a bit of noise, and a bit of a learning curve and audience management) but it is well worth the effort and it’s so fun to do!

I think the US$39.95 price tag is fair considering what you receive, as well as, the love and adoration you’d get from your audience. The main part of the gimmick’s body should last you forever and anything else is easily replaced with a visit to a craft store. The product’s ad copy rings true and you really get plenty of tips, ideas, and info from the two video tutorials. I wouldn’t be surprised if you get at least five different ideas in your head after watching the instructions. You’re only limited by your own imagination 🙂

After helping the young magician set up his Raven, he was up and running very shortly, making paperclips and safety pins vanish from his mum and dad’s outstretch hands. The little man was chuffed and so was I. He reminded me how it was like, being young and wide-eyed again, passionately excited about magic.

TLDR: The Raven by Chuck Leach

Chuck Leach’s The Raven may not be the latest magic effect out in the market but it sure is a golden oldie. There’s good reason why it’s legendary (arguably some magicians think it helped cement David Blaine’s career) so if you’ve misplaced your original gimmick from the 80s/ 90s or think it’s time for a brand new one, don’t hesitate to grab the updated P3 version. It might just make you fall in love with magic all over again. Snap yours up today from the good fellas at Penguin Magic.