A fascinating and riveting read from start to end, this is essentially a touching and captivating insight on the tumultuous life story and inner struggles of a simple girl from very humble beginnings who fought tooth and nail to work her way up to be one of the most respected female magicians of today’s magic industry and why she decided to make the shocking decision to give up her career at the peak of her hard earned success.

‘Magic Babe was my greatest illusion.’ Indeed, as a childhood friend of Ning, I can bear witness for the authenticity of this statement. As vivid memories of the plain, geeky and scrawny kid with unruly, bluntly cut hair were stirred up while reading the book, I was reminded of how I could never quite manage to reconcile the glitz and glamor of my friend’s polished and glamourous Magic Babe persona with the geeky and somewhat awkward plain jane whom I attended 10 years of school with. Surely a person couldn’t change THAT much?

Even the book cover reflected my feelings and the essence of the book – that there are two sides to Ning and that the difference between the two sides are as different as night and day. A super glamourous sex kitten, as opposed to the plain, ultra nice, regular girl next door who always has a bright smile and kind words for everyone till today whom I can vouch is really what lies inside of the busom, sexed up babe we see fronting covers of sexy FHM magazines.

This book made me understand why and how my friend seemingly changed so much over the years, while concurrently bringing me reaffirmation that despite the apparent vast changes, deep inside, little has changed. It is heartwarming, to know that fame and success didn’t manage to corrupt, though the book made me realise that it’s a miracle Ning didn’t completely lose herself along the way.

Filled with unexpected explosive relevations and pictures of Ning as a cute toddler and as a nerdy plain jane as a teenager, this autobiography leaves the reader with a sense that Ning is not someone who is embarrassed of her past, but rather, stands as a self assured, dignified woman who is deservingly proud of being a warrior and a conquerer. As Ning quoted in her book, “You never know how strong you are. Until being strong is your only choice”.

For those who are interested in magic, the book also includes some very interesting secrets behind some magic tricks and illusions. Fascinating, though they obviously pale in comparison to the unveiling of the great illusion of the person we know as Magic Babe Ning.

‘Magic Babe’ Ning aka Ning Cai is one of a kind and her two books are the perfect way to discover it by yourself. Charm, humour and emotion are the key words of what you will learn about her throughout the pages. Get ready to be enchanted by the stories and adventures of one of the best female magicians telling you all about her amazing life!
– Boris Wild, French Champion of Magic
***
I’ve known Ning ever since we both got into magic, and it’s been inspiring watching her growth as an artist and a personality over all of these years. Ning’s endeavors and adventures are a testament to the power of magic to change the lives of both the people who practice it, as well as the lives of those whom they perform it for. Most importantly, though, it’s Ning’s cheery disposition that always makes her a real treat to talk with and listen to, and nowhere is that attitude more evident or contagious than in the pages of this book. So for those of you don’t have the pleasure of calling Ning a close friend like I do, worry not – by the time you reach the end of her story (so far), you’ll feel like one of her BFFs anyway.
-Kevin Ho aka @visualmadness, co-founder of Virtuoso
***
Even if Ning wasn’t the sexiest magic babe ever, she has the most amazing positive energy.  She is infinitely interesting.To put it plainly… she is cool as hell!!!! And her journey in life is one of the most interesting stories. It’s a fabulous book extremely well written, with a foreword by Neil Gaiman. The icing on the cake is there is genuinely great magic tricks taught inside.
– Nathan Kranzo, consultant for Penn & Teller’s “Off the Deep End”
***

I first met Ning when I was an awkward 15 year old teenager who was interested in magic. She had a online magic shop which sold various magic props, and I had ordered some items from her. She was unassuming, friendly and humble back then. Fast forward 10 years and now Ning is a famous, world-renowned and confident performer, while I am now an awkward 25 year old man. I believe this is the main reason why she has published two books about her life while I have not. These books are excellent, by the way. Buy and read them.

A no holds barred, tell all expose that peels back the leather corset and reveals the true beauty of the “Sexiest woman in magic.
– Tim Ellis, two-time FISM World Championships of Magic winner
***
Before Ning Cai became internationally known as “Magic Babe” Ning, many of our Singapore magicians already took notice of this young lady magician.  Because of her outgoing personality, she participated in numerous public magical performances then, including magic contests (and she won).When she officially joined our IBM Singapore Ring 115, I had the opportunity to personally watch her blossomed into a magic superstar together with J C Sum.  I have known Ning Cai as a “go-getter” – whatever that she is interested in, she does not hesitate to experience it herself personally – and she always strives to achieve the best out of it.You can read all about these traits of hers in her 2 books “Adventures Of 2 Girls” and “Who Is ‘Magic Babe’ Ning?”  They will inspire you, as they did me!
– John Teo
President, IBM Singapore Ring 115,IBM Territorial Vice-President for the country of Singapore 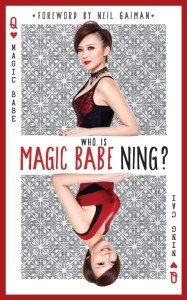