“It’s the best handling I’ve ever seen or used. I hope no one ever finds out about it…” – R. Paul Wilson

“I’ve never been a fan of the CBS routine. Never had anything against it, it just never called to me. That is, until Paul showed me his version up close. It is a thing of beauty with moments of sheer genius. We magi are very fortunate to be living in the Age of Vigil.” – Brad Barton

“Pressley Guitar’s ‘Copper, Brass, and Silver’ features one of the greatest coin gaffs ever invented. Paul Vigil, in his modern handling, uses the gaff more wisely and subtly than any other magician in the world, and now you can learn how and why. His routine is streamlined, powerful, and astonishing.” – Jared Kopf

Paul Vigil is a modern legend in the underground of magic. A student and close friend of Johnny Thompson. When he performs other magicians stop and listen. There’s a reason that many people refer to him as your favorite magician’s magician. He is now sharing on film a piece of coin magic that stuns audiences and flummoxes magicians. Prepare yourself for Paul Vigil’s CBS.

Paul Vigil’s take on the Copper Silver Brass plot is incredible. Not only do you learn all the moves required to do this routine, but the sleights required are well within the ability of most magicians. Included with this download are a set of gimmicked coins made to Paul’s specifications. Originally published in his sold-out book The Doors Of Deception, this is the first time Paul is sharing this effect on the film. Shot from multiple angles in the P3 Magic Studios, Paul also shares his deep thinking on every detail of this routine. This is Paul Vigil’s CBS.

I really love what Penguin Magic has done to package and secure these coins for Paul Vigil’s CBS. The three different coins (pictured above) have their own individual recessed slots in this slim magnetic holder which you can easily slide into your shirt pocket. The link to the online tutorial and its password are glided in gold on the inner flap, but if you got this directly from Penguin Magic like I did, you’ll find the video waiting for you in your account 🙂

For just 50 bucks (plus the cost of the tutorial) I knew these coins couldn’t be made by Todd Lassen or Xavier Belmont …but after inspecting the CBS coins out of their box, I was really pleased to find them to be quality products with a good weight and feel, made with pride and professionalism.

As it turns out, the sets are crafted by Roy Kuepper, the veteran American magician famed for his work in gaff coin fabrication. So if you do wish to order more of these gaff coin sets or their matching ungimmicked counterparts, you can easily do so.

The video tutorial is about thirty minutes long and presented by the creator, award-winning magician/ magic creator Paul Vigil himself. It appears to be filmed at the Penguin Magic studios using multiple cameras and nice clear audio. And as a special bonus, you also get a 20 page PDF document with photographs detailing all the necessary moves and sleights. Sweet.

To be honest, I’ve never been a big fan of the CBS routine until the day I saw Paul Vigil’s handling. Everything changed then. Paul is a very clever thinker and his special unique touches have elevated this standard coin routine from basic to BOOM. Watching you perform this modern day miracle up close, your audience may even think you’re a smooth demi-god of magic.

I really mean it when I say that Paul Vigil’s version is the best. His routine is so well structured, it’s beautiful on so many levels. Involving a spectator, Paul Vigil’s CBS is clear and not confusing, powerful in its different beats of revelation, and just pure joy for people to participate in and also watch. This is the gold standard of magic that is well thought out, magic that packs small but really make a big impact, magic that will make your audience rub their eyes in disbelief.

There is of course, sleights to learn and moves to master. But it’s not too difficult because Paul is a good teacher (mucho kudos to the Penguin Magic team as well for the great sound and video production), and all that hard work pays off in the end. If you want to include a coin routine in your table hopping or strolling magic repertoire, Paul Vigil’s CBS would be it.

A very beautiful coin routine by a clever master magician that comes with a professional set of coins which you’ll never want to leave home without. This may just be your favourite coin routine to perform because the audience will love it. And love you. CBS by Paul Vigil seems to be in limited quantities so be sure to get yours ASAP from the producers, Penguin Magic. 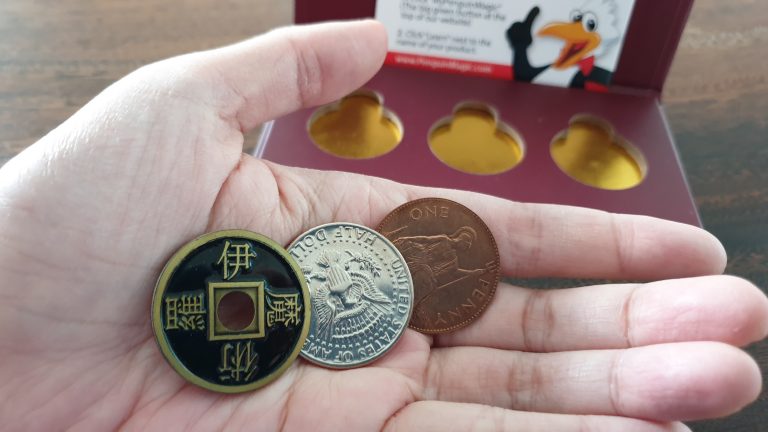