Every now and then, whenever a respected professional releases a gem from their own working repertoire, I’d sit up and pay close attention. But when it’s a creative pro like Chad Long… and it involves a pop gun which you can use for target practice… that’s when I say: SHUT UP AND TAKE MY MONEY!

Chad Long is one of those performers who create baffling magic that audiences love to see again and again. Is it a card stab? Is it a revelation? It’s a trick Chad has been hanging onto for more than twenty years, and now he’s sharing it with you. This is Chad Long’s Pop Gun.

A card is selected, signed, and then lost in the deck. After some visual magic with a marker, the magician gets down to business trying to locate the card. After a couple of hilarious failures, the magician decides to get serious and sprays the deck into the hair. With the sure-fire accuracy of an old west gunslinger, the magician fires a toy gun and miraculously sticks the foam dart to the signed card. Everything can be examined!

Pop Gun comes with all the props you will need to perform this hilarious and unexpected miracle. A great addition to the end of your ambitious card routine or a perfect piece of close up comedy all on its own. Chad has been delighting audiences with this effect since 1986. When the signed card appears on the end of the soft foam dart audiences are surprised and astonished. The routine has built-in misdirection and lots of laughs. The most fun you’ll ever have with a toy gun is Chad Long’s Pop Gun.

Don’t you just love it when two giants come together to create something magically awesome? In this case, I’m talking about a creative force like Chad Long and the dynamic team at Penguin Magic teaming up to produce this very lovely bit of kit.

As you can see from the picture above, that’s part of the Pop Gun gimmicks that you’ll receive once you open the nice magnetic box. Besides a length of string (roughly about a metre or so), there’s also a little secret something which is included to make the effect work. Don’t worry, there’s enough in the ziplock bag to last you a long time, and refills are generally inexpensive. Heck, you may even have a block of it in your magic drawer. You’ll need to provide your own Sharpie marker and cards.

The online tutorial, personally taught by the energetic creator, is about half an hour long. Professionally shot with multiple cameras and clean audio, it looks like this was filmed at the Penguin Magic studios. Chad Long quickly goes through the workings of the trick, along with many lovely bonuses and gags along the way. Various handling methods are thrown around for the sign a card/ find a card effect, so no worries there if you’re not a sleight of hand master because Chad provides different alternatives and ideas.

In his video tutorial, Chad mentions that Pop Gun makes a fantastic closer and I must agree that the cheeky routine does have potential to be a very memorable finale. Success is highly dependent on the performer, obviously, so you’ll have to be as engaging as award-winning magician Chad Long. No pressure 😉

There’s so much to love about the routine. Tie the string to the trigger guard, fire the toy gun, and the sticky dart lands smack into the spectator’s signed card. In the hands of a proficient performer, there will be much laughter and giggles from the very moment you even whip out the brightly coloured pop gun in the middle of a card trick. It’s funny and irreverent, and people know they’re in for a good time. It jazzes up things up too. The quirky introduction of the props itself help make the classic card effect feel and look different.

While everything fits into a jacket pocket and the trick pretty much resets instantly, there’s some practice to perfect in terms of timing and moves before you get out there and perform this for a real audience. So yes, it takes work but it would be worth it; you can easily tell from the trailer that Chad performed the routine to an authentic audience – not paid actors – who truly were entertained. The same props he used are provided in the box, so the magic has to come from you.

This cheeky routine by Chad Long, taken from his professional comedy magic act, would be the only “bullet catch/ card stab” type of magic trick I’d wholeheartedly recommend 🙂 If you’re already an accomplished card magician, Pop Gun easily adds a delightful dimension to your repertoire. It’s not difficult for beginners too, it just takes a little practice! Check it out now at Penguin Magic. 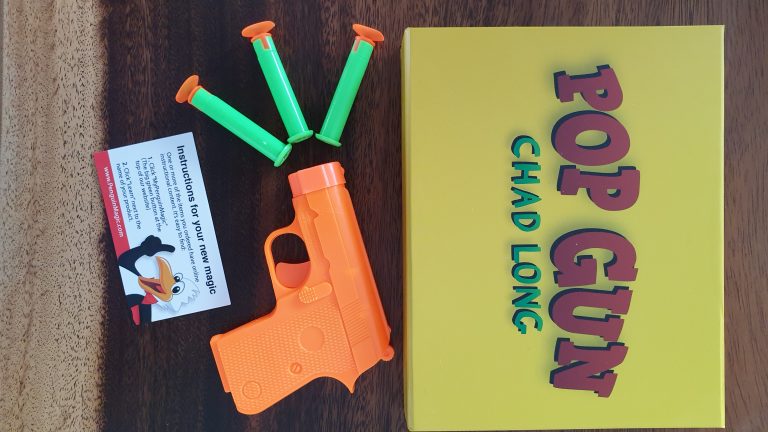