[vc_row][vc_column width=”2/3″][vc_custom_heading text=”Reviewer: John Teo”][vc_column_text]This title can be easily misunderstood.  It is likely to be interpreted as a single effect or even a single routine featuring card under a glass.  Actually, it is an entire act comprising 5 to 6 different card routines!  The act itself lasts almost 30 minutes!

Doc Eason was fascinated by this effect when he first saw Bob Sheets performed it in a bar.  The psychological problem with this effect is that when you fooled an audience at least twice with their card under a glass, they will begin to watch you like a hawk from that point onwards.  Doc knows this, and he openly challenges the audience to catch him doing this. But then, Doc Eason performs other card tricks in-between to distract the audience’s attention.  Then when the audience least expect it, Doc slips another card under the glass!  Altogether, Doc puts a card under the glass a total of 6 times!

The first 2 effects are card transpositions.  Doc believes that card transposition has one of the strongest effects on the audience, so he starts his entire act with this.  2 spectators choose a card each.  Doc reveals the second spectator’s card as the first spectator’s and vice versa.  When this is pointed out to him, he magically rights the 2 cards without physically touching them.  This is then repeated with 2 different spectators, and the audience is non the wiser how this was accomplished.  In this case, Doc uses a duplicate card for the first effect.

The audience is now ready for a card under the glass.  A spectator merely peeks at a card – the card is not physically taken out of the deck.  The deck is shuffled and spread on the table.  When the spectator names her card, it is actually found, not in the spread, but under the magician’s glass!

By now, the audience will be watching very closely.  Doc then distracts the audience with a highly interactive card trick.  Doc gets one card signed and does a 3 to 4 phase ambitious card routine, including the classic bent card.  At the end of the routine, where the misdirection is the strongest, he puts the signed card under the glass.

Now comes a triumph routine.  A card is selected and lost in the deck.  The deck is mixed up with some cards facing up and some facing down.  In an instant, the entire deck rights itself and all the cards are facing downwards except one card – the chosen card.  One more time, the deck is spread and one card chosen.  Doc says this card will be the signed card.  It is not.  The signed card is found under the glass.  This is the fourth card under the glass.

You receive 2 DVDs.  The first DVD gives the performance and then the explanation for each of the routine in the act.  The second DVD is like a toolbox.  It describes in detail many of the sleights Doc uses, such as top palm, double lift, milk shuffle, slop shuffle, half pass, AFTUS move, and the hype (as used in the 3 card monte).  Of interest is Doc’s version of the classic force, his fancy flying swivel cut, and how he uses the double under cut as a card control.

DVD 2 also has an interview session where Doc discusses how he deals with difficult spectators.  Just as in a movie, there is also a small (insignificant) bloopers segment as well as a director’s cut over the entire performance where Doc does a voice-over commentary on the psychology of not only card control, but also on audience management.

This set of 2 DVDs is highly recommended because: 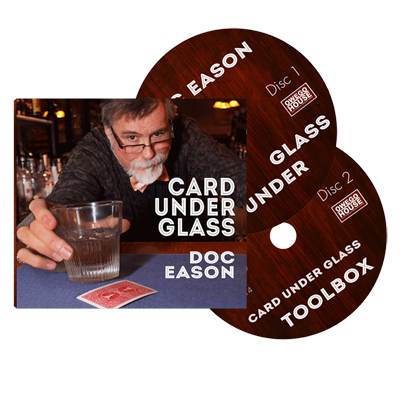