Review: The Unswami by Unknown Mentalist

The Unswami by The Unknown Mentalist is a bundle of 4 ebooks of 84 pages available at Lybrary.com. A swami is an underused classic mentalist tool. There are numerous styles and types of swami gimmicks available. A typical use of a swami gimmick would be to write a two digit number of a business card, put the pencil away, and ask the spectator to name a two digit number. The card is shown to have the same two digit number just written by the performer. It is a classic and strong effect.

With The Unswami, you can show a sealed envelope, ask the spectator to name a two digit number, you or the spectator can open the sealed envelope, take out an index card from the envelope, and written in ink on the index card that was sealed inside the envelope is the same two digit number. You cannot do this effect with a regular swami, but you can with The Unswami.

The Unswami is very well written with clear description with photos on how to make the Unsawmi from a regular swami gimmick. It might take you about 10 minutes to alter one into an unswami type gimmick. The manuscript also shows how to do the unswami routines without using a specially altered swami gimmick by using a regular pen that would take about 1 minute to make the necessary alteration needed. It also contains history of the unswami, tips and psychology on using The Unswami. The basic technique also uses a gimmicked envelope which is very easy to make and is explained  in detail.

In addition, The Unswami contains three additional ebooks. The first is Luck Master. This routine uses the basic Unswami gimmick and technique.  A spectator names a playing card which is found inside a sealed envelope. While you may get a direct hit sometimes, most likely there will be something written in ink on an index card that is sealed inside the envelope with the playing card to make the prediction accurate.

The second ebook is another routine using The Unswami gimmick and technique called Dream Seal. You show three sealed envelopes. One envelope is taken and opened up by a spectator. Inside is a chart containing the value of playing cards. A playing card is selected. A second envelope is opened up that contains a deck of playing cards. The third sealed envelope is opened with a sentence or two along with a number. The spectator picks up the deck of cards and counts face up to that number and the card on that number is the freely selected playing card. The ebook contains various charts that can be printed and used. This is a very good routine and is my favorite.

The final ebook is called Swamirakle and contains a number of routine ideas and effects about using The Unswami, some of which are strictly meant for adult use.

The downside in using The Unswami technique is that along with the unswami gimmick you also will need a specially gimmicked envelope. As such, it is not practical for walk around setting as you will need to use a new envelope each time. If the envelope is not sealed, you can use the same envelope a few times before needing to replace it.

The benefit of using a regular swami type gimmick, is that you can carry it in your pocket and all you need is your own or borrow someone else’s business card and you can show a classic strong mentalism effect. If you do not mind carrying a few envelopes with you or if you want to show a very strong stage or parlor mentalism routine or a close-up routine to a special guest, The Unswami is a very strong technique that adds a deceptive layer to the classic swami.

I rate it 7.5 out of 10 since you need to sue specially prepared envelopes as well as the Unswami gimmick. 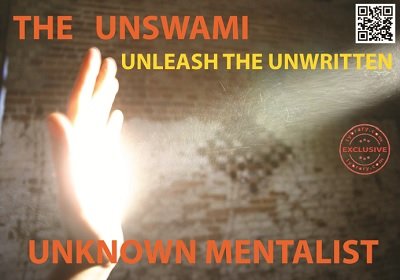