Review: What Tha by Rodger Lovins

These items are very similar to each other. Being a sucker for such effects, I have all of them. In this list, each has its own effect even though they work the same.

Snake Eyes: Has a shocking effect, with the aid of eyes, this makes spectator tend to concentrate more. Plus, you can combine this with other dice effect. Good fitting on the finger.

Creature:  More of a creepy effect, hard and ill fitting on finger.

This prop enables you to produce a “live” creature in your cupped hands and it looks darn real and has the shocking effect on your spectators.

As described in the product description, no hype about it.

Instructions that came with it are in the form of a YouTube link. It is very clear and concise and several methods are taught. There is even a method on showing the hands clean which I think is not really important. Maintenance of the prop is also taught. Cleaning up is also taught in the instructions. The instructions says to perform this for a very short while but I feel that the duration should be long enough for spectator to register that this a “bird” in the cupped hands rather than a black thing moving.

The handling is pretty easy and not difficult to do at all. Magicians of all levels are able to perform this easily. If you perform it using the simple method, there is no worries on angles as the prop is hidden in your cupped hands. Cleaning is relatively easy with the proper misdirection.

This gimmick can look pretty realistic on close examination but this is not meant for close examination, it is rather a quickie type of effect. The prop itself is made of a soft plastic and is covered with feathers. Even the eyes are shiny. But this is upon opening the package, after a few usage, they eyes seems to dim a bit, the feathers becomes flatten and won’t have the “3D” look. I only wish that the prop would look pristine forever.

Despite some drawback on this item, I still like this very much. If you are a sucker for such effects like me, I highly recommend you get this, if you have never had such effects before, this is a good one to start with.

Magic is our passion but we are not a magic shop  You can purchase this here![/vc_column_text][vc_separator][vc_custom_heading text=”Reviewer: Madame Curator”][vc_column_text]American magician Rodger Lovins has invented quite a few nifty magic, with his Ultimate Color Changing Knife perhaps being the most well-known. His latest offering What Tha is more of a gag than a magic trick (i.e. there’s no routine – it’s more of a shock moment you get out of your audience) but since it’s a quick and cheeky gag, What Tha works absolute wonders for the kiddies. Yes, the screams are real.

The official demo video produced is a small glimpse of what to expect. In fact, the production of the simple handheld video is similar to the fuss-free What Tha instructions Lovins filmed, most likely having his camera on a tripod in his living room.

You receive the secret YouTube link in the package that contains the gimmick. It would have been better if Lovins had used a link shortener or QR scan code for ease of convenience; so be patient and careful when typing in the long URL least you mistake some characters for others.

I would say that Lovins’s handmade finger puppet is well crafted but the size was a much too large for me to use comfortably. But I’m an Asian woman with slender fingers (my wedding ring can almost fit inside my spouse’s) so I reckon most men wouldn’t have this problem.

However, one must be careful in storing and using the What Tha gimmick since it does have fragile bits (soft feathers and all) that may fray and go all awry with use after some time or if you’re careless with it. Still, I imagine this to be a huge hit with grandfathers if they feel like using it to tease their young urns.

While sucker effect What Tha is not my cuppa tea, I personally know for a fact that it would definitely appeal to a certain group of people who pride themselves as the creative class clown to be feared every April’s Fool’s Day. So if you’re looking for an alternative to Michael Ammar’s freaky Little Hand, Lovin’s beady-eyed What Tha makes a terrific option! 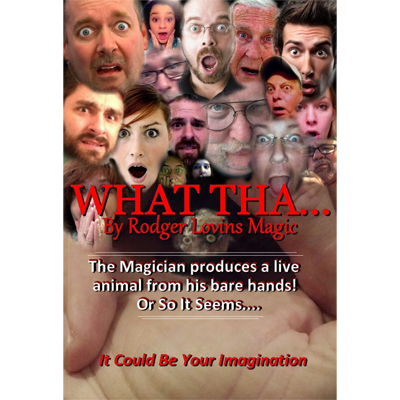