[vc_row][vc_column width=”2/3″][vc_custom_heading text=”Reviewer: Nique Tan” font_container=”tag:h3|text_align:left”][vc_column_text]In effect, during the course of your set of card magic, you show the tab of the card box to a spectator and have them simply think of one of the words they can see printed on there. Then, without any fishing whatsoever, you are able to tell them the very word they were merely thinking of.

Although you get the impression, just by reading the ad copy as well as watching the very brief online demo video, that the spectator is allowed to look at the tab of the card box and think of any word, I would say that that is not really very accurate.

While there really is no fishing required for you to ascertain the thought of word, the spectator cannot really think of any word on the tab.

You are unable to tell from just watching the demo video, but (and I think it is fair to disclose this) the spectator is kind of limited and restricted from the get go as to which words are allowed to be thought of to begin with. Also, they are only allowed a very brief glance at the tab of the card case, which felt to me to be a little suspect – they really are only shown the tab for perhaps a split second before it is very quickly pulled away from them.

It does come complete with an instructional DVD as well as 4 custom designed Bicycle style gimmicks, 2 red and 2 blue, and so you could repeat the effect if you wanted to. However, while the gimmicks are made to work with Bicycle brand card boxes, I do believe that currently with all the updated designs and various prints, the gaffs will see varying levels of being deceptive. They simply might not work with all Bicycle card boxes as the text on the different designs of the standard Bicycle card boxes do differ from each other.

This is not really a problem, until the spectator picks up the card case to have another look (after you have performed the reveal), and then he sees that the thought of word is not even on there. This is a situation that can arise and Wayne does explain the way he gets out of this, but I probably would not be able to go that route, as to me it takes away from the original intended effect of mind reading.

All things considered, I do see some value in this idea, and what was immediately apparent to me was the possibility of combining and perhaps using this within the course of a longer piece, perhaps within the context of a mental epic type of routine. As a standalone item, being a word reveal, I could think of other methods which would be more suited to my tastes. However it could work for the casual performer, as a quick bit to segue way into something else, either going into card material or moving away from card material.

Magic is our passion but we are not a magic shop  You can purchase this here![/vc_column_text][vc_separator border_width=”2″][vc_custom_heading text=”Reviewer: Madame Curator” font_container=”tag:h3|text_align:left”][vc_column_text]TAB Test by Wayne Fox is essentially a mini modern version of the traditional Book Test, aimed at those of us who perform miracles with cards but also want to do some interactive mental magic with the innocent card box that’s already been out in the open, lying in plain sight.

This is something special since I don’t know of any other similar marketed effect like this (i.e. casually using the text printed on the flap of the card box in an updated book test type of effect) offered for sale in the market thus far, so TAB Test really has got a great USP going for it.

Magic creator Wayne Fox from the UK already has several products under his name (Flick Drift, Secret Soldier, Safe Keeping) and if you already own his Thought Process, you may find it a tad similar to his latest offering. In the TAB Test package, you receive 4 well-made gimmicks (2 red, 2 blue) and a DVD about 20 minutes long, that clearly teaches this straightforward mentalism effect. His charming English accent may be quite different from the typical Northern American ones we are usually accustomed to, but I did not have any trouble understanding his instructions.

As with this sophisticated genre of magic, mentalism takes a lot of sleight of mind, some sleight of mouth, plus a great deal of of practice and experience in terms of audience management. I would say that the ad copy is fairly accurate but as the mentalist you still need to be in charge and guide your audience accordingly; they don’t actually merely think of just “any word” as stated by the producer/ creator in the ad copy but yes there is no fishing involved.

In the right hands TAB Test will play very well as a small part of a stage or parlor performance, besides the close-up setting as seen in the demo video, but you do need to manage scrutiny since there will be some small discrepancies, especially dependent on the decks (or rather the card boxes they come in) that you choose to use. So once again, good audience management is key.

I personally think that the TAB Test is not a routine I would choose to open or close my show with, but as a middle performance filler it can be something special. I like that it uses something everyone is familiar with and the 4 different gimmicks in the package will provide different options and outcomes, in the event you plan to perform this mini mentalism miracle for a semi-same crowd at a different event. It packs super flat but though the gimmicks are not flimsy or badly made in any way, with much use you’ll need replacements eventually and this cost could be a factor for some. 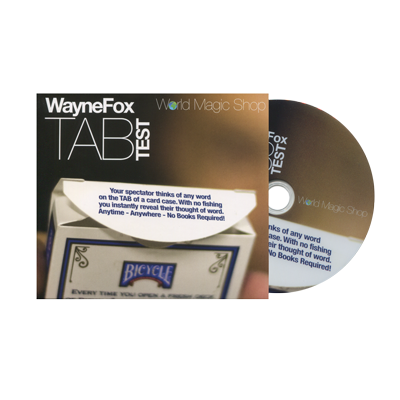