[vc_row][vc_column width=”2/3″][vc_custom_heading text=”Reviewer: John Teo”][vc_column_text]Whiplash is a gimmicked playing card.  It looks like an ordinary playing card but it allows you to vanish and transform cards.  It is an utility card gimmick.  It can be casually shown on both sides without anyone suspecting that it is not a legitimate playing card.

You receive the very well-made Whiplash card constructed with red back bicycle cards.  You are also provided with a password to access an online video instruction.

In the video, Joshua Janousky teaches 4 different routines utilizing his Whiplash card.  They are:

Whipped Oil And Water – this is the oil and water routine in 3 phases.  In the 1st phase, 2 black Jacks and 2 red Jacks are mixed so that they alternate black, red, black and red, face downwards.  With a magical gesture, they are turned face upwards, and immediately shown to be separated with the 2 black Jacks together and the 2 red Jacks together.  In the 2nd phase, the 4 Jacks are again mixed in alternating colours, this time in a face-up spread.  Without any cover, the 4 Jacks visually rearrange themselves so that the black cards are gathered together and the red Jacks are together.  In the 3rd and final phase, both a red and a black Jacks are given to a spectator.  The performer holds the other 2 black and red Jacks face upwards.  The spectator names a colour, say, red.  Magically, the performer’s 2 cards become the black Jacks and the spectator has the 2 red Jacks cards.

Whipped Sandwich – this is a visual sandwich effect.  Performer takes out the 2 black Jacks.  A card is selected from the remainder of the deck and then lost in it.  Performer says the 2 black Jacks are going to find the selected card.  Visually, a face down card suddenly appears between the 2 face-up black Jacks.  This spread of 3 cards is turned around to show that the trapped card is indeed the chosen card.  Just as quickly as the selected card appears between the 2 Jacks, it now vanishes.  The 2 black Jacks can be shown freely around to be just the 2 cards.  The selected card found back in the middle of the deck as the only reversed card.

Whipped Across – this is cards across using only the 4 Jacks.  3 Jacks are held face downwards in the right hand.  1 Jack is held face downwards in the left hand.  Magically, the right hand is now seen holding only 2 cards and the left hand now has 2 cards.  The Jacks in both hands are now turned face upwards.  Visually, 1 Jack vanishes from the right hand to join the 2 Jacks in the left hand.  A spectator now holds on to the 3 Jacks.  Magically, the only Jack left is vanished.  The spectator checks his packet of 3 cards – it now has all 4 Jacks.

Note that all the changes mentioned are instantaneous and visual by using the Whiplash card.  If you like what you read, you have 4 different routines you can use with this product.  All the 4 effects, with exception of the Whipped Across trick, are not difficult to do and are quite angle proof.  The last phase of the cards across effect requires an ability to executive a card vanish which is by itself, quite angle sensitive.

The video is about 95 minutes long.  Joshua also goes into great details on how to repair and make from scratch a customized Whiplash card.  Knowing that not everyone is DIY savvy, Joshua provides you with a ready hand-made Whiplash gimmick card when you purchase the effect.  I believe the gimmicked card is supplied only with a red back bicycle Jack card.  The section on splitting playing cards is worth your investment in this effect.

Towards the end of the video, Joshua goes into a voice impression of celebrities.  I believe this is his other talent.  You will enjoy viewing it.

Joshua explains everything very well in the video.  Finally, he gives very good tips on the usage of Whiplash and discusses the effect of lighting on Whiplash.

At this affordable price, you should purchase 2 – one is to use as a replacement in case after much constant use, your Whiplash card gets a little loose or damaged. 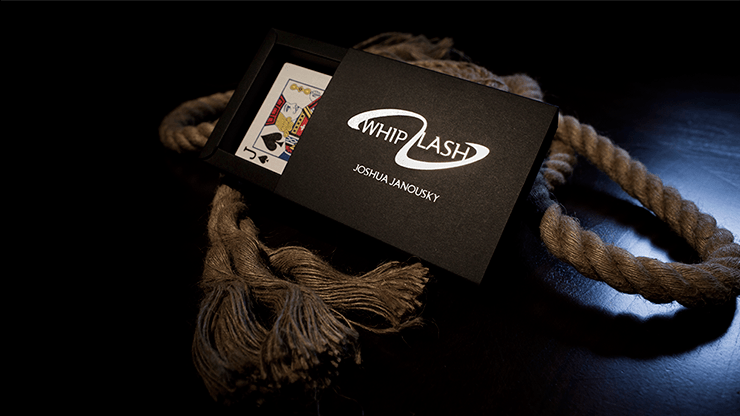